Twist the doorknob to the apartment, walk inside, and it’s,
“I’m holding a doctor’s letter saying my daughter wants a sex change operation into a man. That true?”
Letter in one hand, at an angry five-foot-three, Mom stands taller than any building I know of.
“Bitch, do not look away from me. Is — it — true?”
Silence.

kkkk“ ‘Cause if it is, watch me go pick up that fucken phone in the living room, call the police right now, tell them Come grab my daughter, lock her Black tail behind bars. And know what them cops’ll do to a masculine butch woman behind bars the minute her single mother turns her back on her? They will rape you — two, three, maybe ten times in who knows how long or how many. Because sexual assault is how people like that, people in power who know you mean nothing to nobody, that’s how Authority turns a masculine butch bitch back into a lady — rape. Up against the wall, lights out, arch your backside, then one after another after another non-stop penetration. Never mind the throbbing pain plugging your insides, never mind screaming your voice thin into the dark night because nobody hears, never mind the look of shameful terror you’ll wear on your face for the rest of your life. And forget teaming up with some progressive Jewish social justice liberal lesbian lawyer hungry for an important cause who’ll say Quick, go file a complaint with your Superior. Superiority couldn’t give two shits, not unless you’re dead and when dead, you don’t make the five o’clock, nine o’clock, eleven o’clock or next day’s news, why? ‘Cause you’re Black plus masculine plus a woman, and Black women, we don’t get raped, not according to white America. According to white America, every Black woman is a stereotype and that stereotype is you’re a sex-starved whore looking for the next trick to have a baby with to get back on child support while on welfare sucking the system dry that way sistah grabs more dick from more hardcore sex for more free government money. We cannot, do not, never-ever-ever experience rape when Black and a woman in white America — ask Tawana Brawley, ask Anita Hill, ask Naffisato Diallo, ask every slave woman from the time she set foot in this wilderness called America, then ask her kids. Trust me, when you’re a Black woman nobody asks about it or talks about it or assumes, wonders, or gives a damn when you do say something. So it lives in silence and dies in your silence. You wanna go through that experience? Behind prison bars? Or —” Mom takes a step so close to me that her voice dips into a shallow whisper — “do what’s easy. Drop the bullshit sex-change idea, wear a dress, don some earrings, put on make-up, get a job, get a boyfriend, get married, get a house, get a car, get pregnant, get kids, get fat, he’ll cheat, you’ll separate, he’ll lie, you’ll divorce, join a gym, fuck your Tai- Chi trainer at a block party during Black History month. It is thaaaaat fucken simple.“

kkkkShe’s less than two steps away about to smash something heavy over my head, make my world spin senseless all ‘cause I can’t be like her. Know what I’m thinking? Hit me Mama. Please smash something on me. Or slap me. Or scream. Do something, anything, whatever you want ‘cause at least it’ll show you still care. And I know it won’t hurt, ‘cause nothing, I mean no amount of violence, can destroy me worse than what Daddy did when he up ‘n’ left without a word one day, never looking back. If you abandon me like that Mama, when my tears dry and my head stops spinning so the pain has enough time and room to sink deep inside, I don’t know who I’ll be.

“Dress or no dress. Decide,” she says.
“Mom,” I say, “when I transition, you afraid I’ll leave you like Dad did?”
She’s so small at that moment, her breath so even and still as she stands motionless for what adds up to eternal time. I continue.

kkkk“Why are you so scared of this thing, Mom? Tell me, say, ‘Are you rejecting me as your mother? ‘Cause it feels like I’m losing my baby. You’re changing into someone else, someone I won’t know. I’m a single parent, you’re my only child, you tell me what else I got left in this world besides you?’ Ask, ‘Will I get grandkids after you do this operation?’ Say, ‘I’ve had to take control to put food on the table, clothes on your back, change in your pocket. You do this, I won’t know what to do and that scares me more than I care to admit. Yeah, your calm cool collective controlled mother is terrified of the unknown.’ Say, ‘What will God make of this change? What will happen to your soul and mine when I accept it?’ Then I’ll say, ‘Mom, God is trans. Think about it. And trans people are God. Think about it.’ Then you’ll say this gently in a voice no louder than a whisper in the wind, ‘You are that dream inside my womb slipping away.’ Whispering back, I’ll say, ‘Mom, it was never there to begin with.’ Then we’ll talk deep and real and honest and it’ll hurt like hell in the end. And at the end of that deep, real, honest, painful talk, I want you vulnerable. S’right, open up, Mom, ask — without threatening to lock me up so I turn into someone I can’t never ever be — just ask, look me in the eye with every contradiction in your heart, and the struggles that never end and life’s mysteries and secrets and failures and promises and unrealized dreams, knowing how hard it will be to forgive me for who I am — ask me, Mom, say ‘How can I support you in this?’ That’s what I want you to say. ”

kkkkSilence, and in that silence everything she can’t say exists. How she blames herself ‘cause we can’t afford to move to another neighborhood, escape negative influences in exchange for a better home on the other side. How she blames herself for making past choices she can’t unmake in the present to better our future. Fingers down to the bone, spine bent like a spoon, drop down kneeling in solemn prayer, no amount of hard work or planning or careful calculation or conversatin’ with God could change who we are or what they say about us with our backs turned. “Bulldagger butch dyke daddy trans king tomboy faggot total transsexual pink tragedy” — those are my labels, the ones I shoulder when I open the door to face the world. And they’ve been stereotyping my Mama for even longer: “Slave, Mammy, Welfare Queen, Aunt Jemima, hella hoochY, African, homophobe, transphobe, limited, too Black, not white enough, dirt poor, too ethnic, post-racial, too urban, too ghetto, too southern, too country, too uppity, now down she’ll fall ‘cause she’s too proud, too empowered, too Black to be too freeeeeeee. Woman, why are you so Black and so free? I know you know that’s dangerous, right?”

Mom is silent.
“Please say you’ll support me in this, Mom.”
Mom opens her mouth.
“Say it.”

kkkkMom closes her mouth. Mom shuts her eyes. I shut mine too, imagining my world bathed in sunshine yellow like in the movies when those perfect families gather at the table during meals, laughter spilling skyward against a backdrop of artificially sweet sounds. This movie is called “My Life,” subtitled “XXYX”.

kkkkI emerge from a steaming hot shower radiant Black, towel round my waist. I sit at breakfast about to pour farm fresh cow milk on my heart-healthy, vitamin-rich organic cereal when Mom reaches for my chin. She strokes my facial hair — beard, mustache, side burns. She touches my chest, her fingers running clear across my scars. Music stops. Time slows to a near halt and for a moment, maybe longer, I believe in the power of my imagination to change the whole world. It’s saying there’s a place, sacred and celebrated, where my mother understands me. Where she supports me. I’m just about to ask if she thinks me being born with breasts and a vagina makes me any less of a man when the music picks up again. Subtitles rolling at the bottom of screen read as follows: “Son, I am so proud of you. You found your true self. How’d you do it?”

kkkkI tell her: “God planted my assignment inside your womb. Mistake. Wrong. So I crawled inside to fix everything. And to confront God. I looked. But God was missing. My Heavenly Father absent. Dad was missing too, nowhere near your inner pleasure or mystery. But guess what I found? My divine assignment. It read ‘girl,’ ‘lesbian,’ ‘butch’ — labels never ever fit, do they? I crawled out, planted new seeds, guess where? Inside my own womb. Then I gave birth to myself. Born again. Reborn into a new gender with a new name, new pronoun, new birthday, new identity, new life. That’s my transition. Them scars between my legs, that’s living proof.”

kkkkIn this movie of my life, Mom caresses my flesh wounds, her fingers traveling up, down, soft strikes like sssh-sssh-sssh across my chest. Does she see me? Not even the mirror can. Want my definition of a mirror? It’s my rapist. It undresses my body nonstop with false labels like “girl.” Then them labels stick to a clueless society that worships lies. The mirror is my rapist. So are you looking at me with mirror eyes, Mama? Yes? No? Let me to teach you how to look at me.

1.Don’t use your eyes. Unsee to see me so I can open your eyes.
2.Touch my body. Yes, look with your hands. Feel everywhere fearlessly.

kkkkKnow how you say you can’t trust a Black man, Mama? Well, I’m that Black man you can trust. Touch, Mama. Know how you say Black men have no feminine side? Do you feel mine? Touch between my legs, and don’t stop until you find Daddy, Mama. Know how you say men think first with their penis? What would that make me in your eyes? I’m no woman; I’m no man; I could be in-between or nothing and if that makes me invisible while here, how come I’m not God? Touch. Use my body. You have pain, Mama. I have scars. Dig deep into them. I’m healed, right? Now you know there is power in a queer body that cannot conform to them labels but has healed, survived, lived beyond them. So why would I want to be normal?

BLACKOUT.
End of movie magic.
End of trans optics.
I open her eyes and mine.
Mom is silent.

Mom is silent.
Her silence is eternal … to this day and beyond. 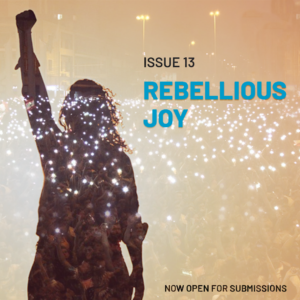 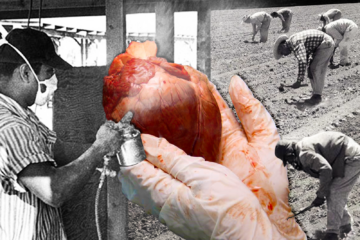 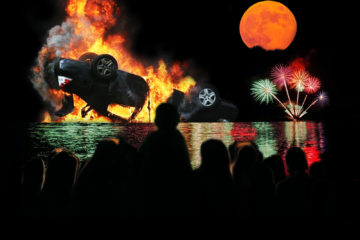 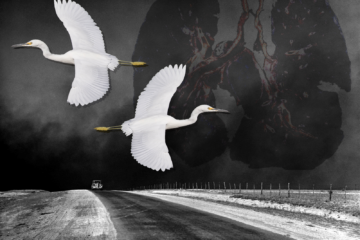 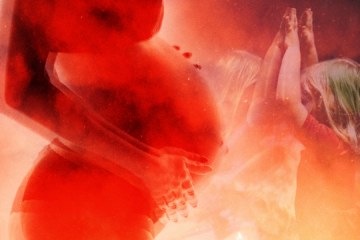 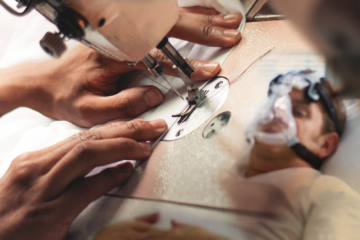 To My Father, on the One-Year Anniversary of His Death