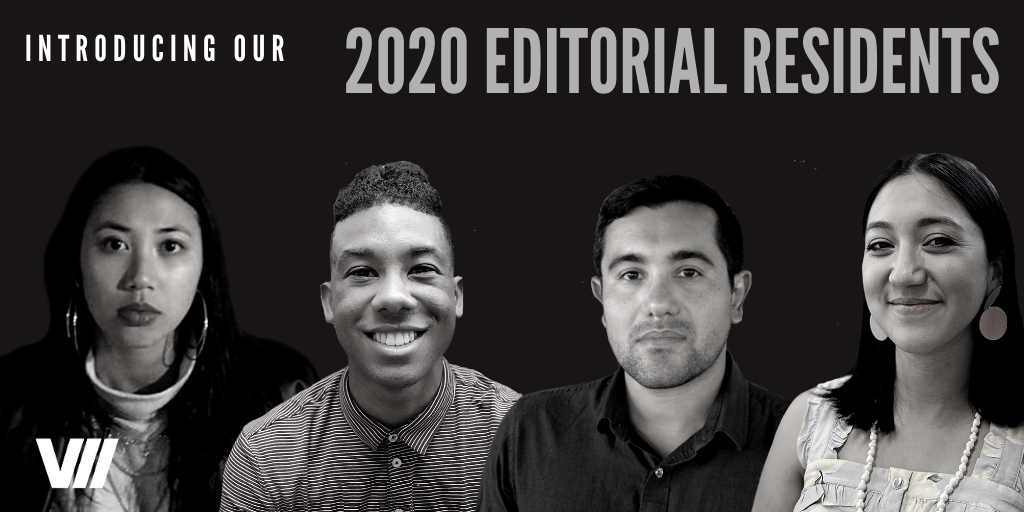 They each come to our Issue 12 topic, “Before After,” from a unique and different perspective, and our hope is that their collective voices will help to set the tone for our issue, which investigates truths, lies, and the roles we all play in upholding and unraveling the current social fabric. They will be among the 12-16 voices we publish for Issue 12, which launches at the beginning of August. Below, get a glimpse into who our four extraordinary residents are, and why we were so excited to bring these four necessary voices together for our first-ever virtual residency.

Dena Igusti (she/they) is a queer Indonesian Muslim poet, playwright, and journalist based in Queens, New York. She is the co-founder of Asian multidisciplinary arts collective UNCOMMON;YOU and literary press Short Line Review. She is a 2018 NYC Youth Poet Laureate Ambassador and 2017 Urban Word Federal Hall Fellow. She is a 2019 Player’s Theatre Resident Playwright for her co-written Off-Broadway production SHARUM. She is a 2020 Ars Nova Emerging Leaders Fellow. Her work has been featured in BOAAT Press, Peregrine Journal, and several other publications. She has performed at The Brooklyn Museum, The Apollo Theater, the 2018 Teen Vogue Summit, and several universities across the nation. Her forthcoming collection will be published with Game Over Books in Summer 2020. One big reason we selected Dena as one of our four 2020 Editorial Residents is that there is a fire and need to their words. We kept coming back to the urgency in their work, both on and off the page, as we’re all about how writing fits into, effects, and challenges the world. As in, yes, write your memoir, but also, how do you contextualize your work within the bigger picture that is society and its ailments and failings? Dena’s work examines the ways that things were taken from her, but she also seeks joy in the process of introspection. We felt a subliminal power to their poetry that, to us, breathes “before after,” which is our topic for Issue 12. We cannot wait to see them in concert with the other residents.

Teri Vela (she/her) is a latinx poet, witch, member of the legal community, and temporarily pregnant person, born and raised in Las Vegas, Nevada (Southern Paiute traditional lands). Her publications include poetry in Witch Craft Magazine, Clark: Poetry from Clark County, Nevada, and a nonfiction essay for the anthology I Wrote it Anyway. Her poetry examines home, survival, identity, grief, and the everyday in the mojave desert. One big reason we selected Teri as one of our four 2020 Editorial Residents is that there is a generosity and sensitivity to her approach toward writing and poetry, but her poems do not shy away from ruthless honesty. Her work interrogates borders, family, culture, and the past, all the while resisting patriarchal constructs and customs. Additionally, her background as a social justice worker paired with her connection to the divine spoke to us in a deep and powerful way, and we cannot wait to be in conversation with Teri, and watch her words inspire this cohort, and those who read them.

Michael Frazier (he/him) is a poet and teacher based in Kanazawa, Japan. He received his BA from NYU, where he was the 2017 poet commencement speaker and a co-champion of CUPSI. He’s performed at Nuyorican Poets Café, Lincoln Center, and Gallatin Arts Festival, among other venues. A staff reader for The Adroit Journal and an alumnus of Callaloo, his poems appear, or are forthcoming, in COUNTERCLOCK, Construction, Visible Poetry Project, Day One, and elsewhere. He was most recently named a Brooklyn Poets Fellow. Ask him about his favorite anime and what Christ has done in his life. One big reason we selected Michael as one of our four 2020 Editorial Residents is that there is such an earnestness to his work. As in, there is a shape to the urgency with which he moves into the realm of poetry to blend Blackness, masculinity, religion, and, plot twist: hope. Michael’s approach includes an upliftedness that isn’t jaded, a perspective that freely sifts through current American issues with a touchstone of faith. His words jump off the page because Michael does not only perform at the desk. A spoken word artist and educator, his work sits at every intersection of being, as it observes, records, and reflects stories of truth.

Rogelio Juárez (he/him) is the grandson of a Bracero farm worker and the son of a marine and an immigrant from Ciudad Juárez. He grew up in the suburbs of Arizona where learning Spanish was seen as a joke, a waste of time, something they slapped his mother on the wrist for when she was a child. He didn’t read about the Chicano movement in a single line of a textbook until he was 22 years old. He writes to his dead, to the ones he lost, however poorly or mistakenly. He disagrees with Freud’s idea of grief who said its function is to detach the survivor’s memories and hopes from the dead and instead sees grief, as Alexander Chee says, as irrevocably bound to love. His own writing is tied to assimilation, grief, and finding words that go against the violence of the national narrative.

After the death of his father, he came extremely close to not graduating high school. Instead of attending class he went somewhere else (Middle-Earth, Dune, the nighttime journey of Milkman Dead finding his grandfather’s farm). It felt like a privileged migration, a surviving that he didn’t know he was going through. What pushed him toward life was discovering Toni Morrison and reading Song of Solomon, the first non-white novel he encountered on a syllabus. All of this as his attempt to understand how writing didn’t just come from reading and language, but from the world, too. How writing is bound to flight, to discovering that one’s sense of loss is inextricably tied to one’s capacity to reimagine — that this can lead to the work of literature.